Late last year saw the re-emergence of a nasty phishing tactic that allows the attacker to gain full access to a user’s data stored in the cloud without actually stealing the account password. The phishing lure starts with a link that leads to the real login page for a cloud email and/or file storage service. Anyone who takes the bait will inadvertently forward a digital token to the attackers that gives them indefinite access to the victim’s email, files and contacts — even after the victim has changed their password.

Before delving into the details, it’s important to note two things. First, while the most recent versions of this stealthy phish targeted corporate users of Microsoft’s Office 365 service, the same approach could be leveraged to ensnare users of many other cloud providers. Second, this attack is not exactly new: In 2017, for instance, phishers used a similar technique to plunder accounts at Google’s Gmail service.

Still, this phishing tactic is worth highlighting because recent examples of it received relatively little press coverage. Also, the resulting compromise is quite persistent and sidesteps two-factor authentication, and it seems likely we will see this approach exploited more frequently in the future.

In early December, security experts at PhishLabs detailed a sophisticated phishing scheme targeting Office 365 users that used a malicious link which took people who clicked to an official Office 365 login page — login.microsoftonline.com. Anyone suspicious about the link would have seen nothing immediately amiss in their browser’s address bar, and could quite easily verify that the link indeed took them to Microsoft’s real login page: 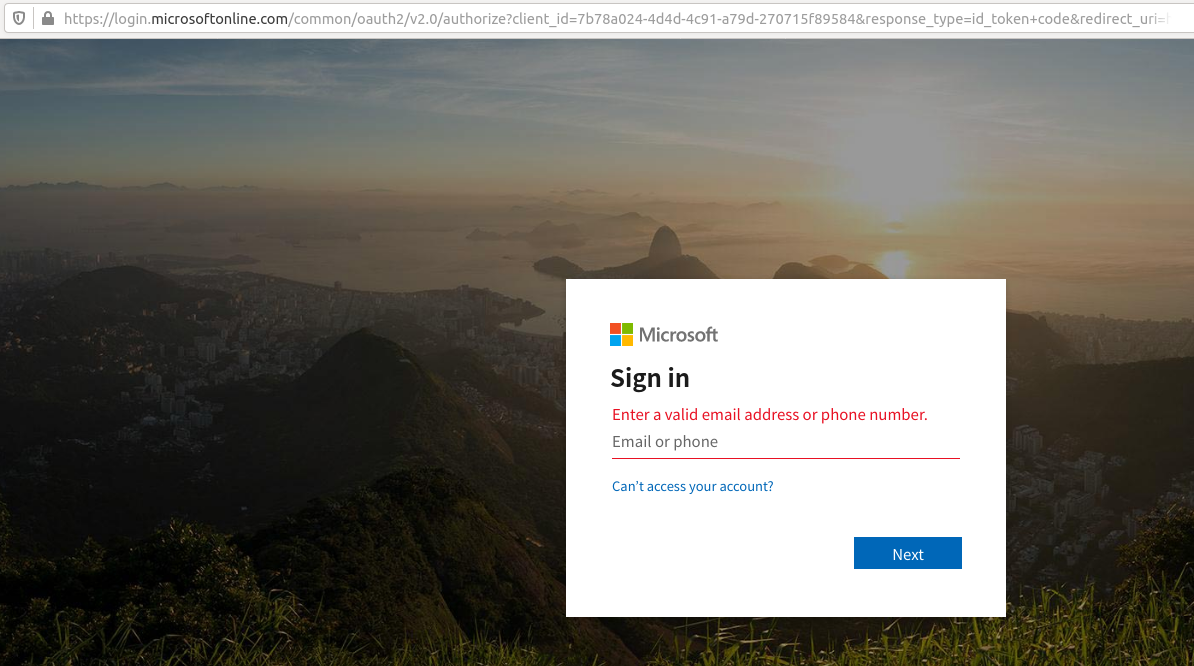 Only by copying and pasting the link or by scrolling far to the right in the URL bar can we detect that something isn’t quite right:

Notice this section of the URL (obscured off-page and visible only by scrolling to the right quite a bit) attempts to grant a malicious app hosted at officesuited.com full access to read the victim’s email and files stored at Microsoft’s Office 365 service.

As we can see from the URL in the image directly above, the link tells Microsoft to forward the authorization token produced by a successful login to the domain officesuited[.]com. From there, the user will be presented with a prompt that says an app is requesting permissions to read your email, contacts, OneNote notebooks, access your files, read/write to your mailbox settings, sign you in, read your profile, and maintain access to that data. 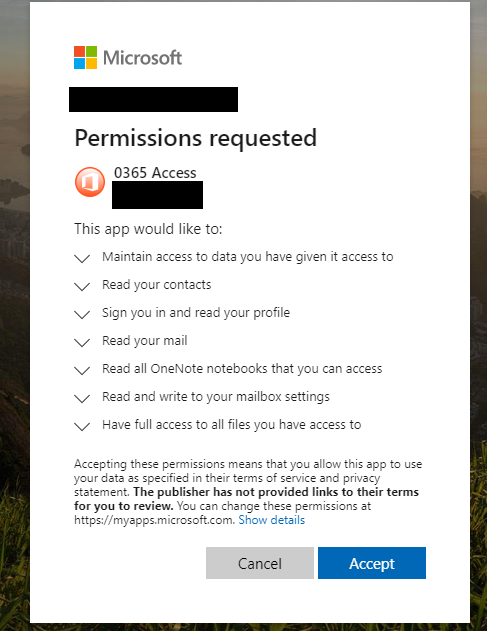 According to PhishLabs, the app that generates this request was created using information apparently stolen from a legitimate organization. The domain hosting the malicious app pictured above — officemtr[.]com — is different from the one I saw in late December, but it was hosted at the same Internet address as officesuited[.]com and likely signed using the same legitimate company’s credentials.

PhishLabs says the attackers are exploiting a feature of Outlook known as “add-ins,” which are applications built by third-party developers that can be installed either from a file or URL from the Office store.

“By default, any user can apply add-ins to their outlook application,” wrote PhishLabs’ Michael Tyler. “Additionally, Microsoft allows Office 365 add-ins and apps to be installed via side loading without going through the Office Store, and thereby avoiding any review process.”

In an interview with KrebsOnSecurity, Tyler said he views this attack method more like malware than traditional phishing, which tries to trick someone into giving their password to the scammers.

“The difference here is instead of handing off credentials to someone, they are allowing an outside application to start interacting with their Office 365 environment directly,” he said.

Many readers at this point may be thinking that they would hesitate before approving such powerful permissions as those requested by this malicious application. But Tyler said this assumes the user somehow understands that there is a malicious third-party involved in the transaction.

“We can look at the reason phishing is still around, and it’s because people are making decisions they shouldn’t be making or shouldn’t be able to make,” he said. “Even employees who are trained on security are trained to make sure it’s a legitimate site before entering their credentials. Well, in this attack the site is legitimate, and at that point their guard is down. I look at this and think, would I be more likely to type my password into a box or more likely to click a button that says ‘okay’?”

The scary part about this attack is that once a user grants the malicious app permissions to read their files and emails, the attackers can maintain access to the account even after the user changes his password. What’s more, Tyler said the malicious app they tested was not visible as an add-in at the individual user level; only system administrators responsible for managing user accounts could see that the app had been approved.

Furthermore, even if an organization requires multi-factor authentication at sign-in, recall that this phish’s login process takes place on Microsoft’s own Web site. That means having two-factor enabled for an account would do nothing to prevent a malicious app that has already been approved by the user from accessing their emails or files.

Once given permission to access the user’s email and files, the app will retain that access until one of two things happen: Microsoft discovers and disables the malicious app, or an administrator on the victim user’s domain removes the program from the user’s account.

Expecting swift action from Microsoft might not be ideal: From my testing, Microsoft appears to have disabled the malicious app being served from officesuited[.]com sometime around Dec. 19 — roughly one week after it went live.

In a statement provided to KrebsOnSecurity, Microsoft Senior Director Jeff Jones said the company continues to monitor for potential new variations of this malicious activity and will take action to disable applications as they are identified.

“The technique described relies on a sophisticated phishing campaign that invites users to permit a malicious Azure Active Directory Application,” Jones said. “We’ve notified impacted customers and worked with them to help remediate their environments.”

Microsoft’s instructions for detecting and removing illicit consent grants in Office 365 are here. Microsoft says administrators can enable a setting that blocks users from installing third-party apps into Office 365, but it calls this a “drastic step” that “isn’t strongly recommended as it severely impairs your users’ ability to be productive with third-party applications.”

PhishLabs’ Tyler said he disagrees with Microsoft here, and encourages Office 365 administrators to block users from installing apps altogether — or at the very least restrict them to apps from the official Microsoft store.

Apart from that, he said, it’s important for Office 365 administrators to periodically look for suspicious apps installed on their Office 365 environment.

“If an organization were to fall prey to this, your traditional methods of eradicating things involve activating two-factor authentication, clearing the user’s sessions, and so on, but that won’t do anything here,” he said. “It’s important that response teams know about this tactic so they can look for problems. If you can’t or don’t want to do that, at least make sure you have security logging turned on so it’s generating an alert when people are introducing new software into your infrastructure.”