Ransomware at IT Services Provider Synoptek

Synoptek, a California business that provides cloud hosting and IT management services to more than a thousand customers nationwide, suffered a ransomware attack this week that has disrupted operations for many of its clients, according to sources. The company has reportedly paid a ransom demand in a bid to restore operations as quickly as possible.

Irvine, Calif.-based Synoptek is a managed service provider that maintains a variety of cloud-based services for more than 1,100 customers across a broad spectrum of industries, including state and local governments, financial services, healthcare, manufacturing, media, retail and software. The company has nearly a thousand employees and brought in more than $100 million in revenue in the past year, according to their Web site. 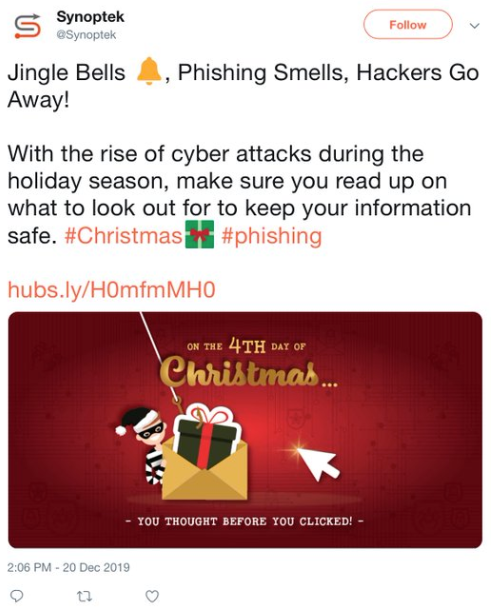 A now-deleted Tweet from Synoptek on Dec. 20 warned against the dangers of phishing-based cyberattacks, less than three days prior to their (apparently phishing-based) Sodinokibi ransomware infestation.

News of the incident first surfaced on Reddit, which lit up on Christmas Eve with posts from people working at companies affected by the outage. The only official statement about any kind of incident came late Friday evening from the company’s Twitter page, which said that on Dec. 23 it experienced a “credential compromise which has been contained,” and that Synoptek “took immediate action and have been working diligently with customers to remediate the situation.”

Synoptek has not yet responded to multiple requests for comment. But two sources who work at the company have now confirmed their employer was hit by Sodinokibi, a potent ransomware strain also known as “rEvil” that encrypts data and demands a cryptocurrency payment in return for a digital key that unlocks access to infected systems. Those sources also say the company paid their extortionists an unverified sum in exchange for decryption keys.

Sources also confirm that both the State of California and the U.S. Department of Homeland Security have been reaching out to state and local entities potentially affected by the attack. One Synoptek customer briefed on the attack who asked to remain anonymous said that once inside Synoptek’s systems, the intruders used a remote management tool to install the ransomware on client systems.

Much like other ransomware gangs operating today, the crooks behind Sodiniokibi seem to focus on targeting IT providers. And it’s not hard to see why: With each passing day of an attack, customers affected by it vent their anger and frustration on social media, which places increased pressure on the provider to simply pay up.

A Sodinokibi attack earlier this month on Colorado-based IT services firm Complete Technology Solutions resulted in ransomware being installed on computers at more than 100 dentistry practices that relied on the company. In August, Wisconsin-based IT provider PerCSoft was hit by Sodinokibi, causing outages for more than 400 clients.

To put added pressure on victims to negotiate payment, the purveyors of Sodinokibi recently stated that they plan to publish data stolen from companies infected with their malware who elect to rebuild their operations instead of paying the ransom.

In addition, the group behind the Maze Ransomware malware strain recently began following through on a similar threat, erecting a site on the public Internet that lists victims by name and includes samples of sensitive documents stolen from victims who have opted not to pay. When the site was first set up on Dec. 14, it listed just eight victims; as of today, there are more than two dozen companies named.